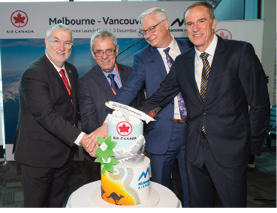 The limited run flight will operate until 04 Feb, before Canada’s flag carrier returns down under for year-round flights beginning 03 Jun.

“Our seasonal service will be of particular interest to Australians travelling for a Canadian winter vacation and North Americans travelling to enjoy Australia’s summer season,” Smith said.

“The launch of year-round service next June will provide additional options for business and leisure travellers between our two continents.”