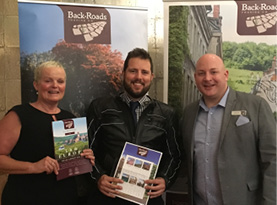 BACK-ROADS Touring held an agents’ seminar at the Kurrajong Hotel Canberra earlier this month, strongly supported by over 50 agents from the region.

Attendees were updated on the success of the 2017 season and an introduction to the 50 tours featured in the 2018 program.

A number of gifts were awarded along with the major prize of the night going to William Mackay from Flight Centre Manuka who won his selection of a tour. The post Back-Roads in Canberra appeared first on Travel Daily.