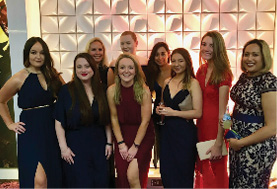 THE rain couldn’t dampen the spirits of the six lucky Flight Centre agents and Travel Daily comp winner who all scored tickets to see Australian film and television’s night of nights, the 7th annual AACTA Awards held at The Star last night.

“It was a pleasure to host such a high calibre of partners from the travel trade in what was a great evening supporting local Australian cinema and television talent,” national account manager for FCTG at DL, Jamie Swan said.

The night was dominated by the biographical film Lion, a film that has become one of the highest grossing Aussie productions of all time and getting Oscar attention.