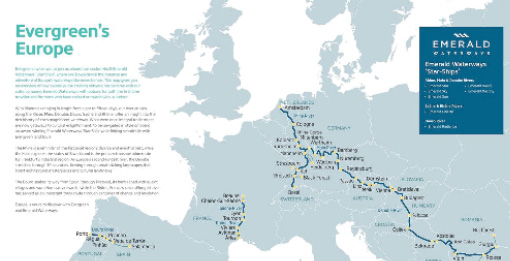 MORE than a dozen new cruise/tour combo itineraries in Europe have been introduced by Evergreen Cruises and Tours as part of the Australian company’s river cruising program for 2019.

The range builds on the success of Evergreen’s eight-day voyages on European waters using its ‘Star-Ships’ in France and Portugal that enable back-to-back packaging of sailings on one river to another.

Through the addition of a luxury yacht in Croatia (TD 07 Mar) & an extended range of sailings in Russia – both of which are charters – Evergreen has ramped up its combinations by 16.

Options include a 15-day Three Rivers Discovery river cruise taking in Portugal and Provence, aimed at travellers who may have already explored the Amsterdam to Budapest route and want to delve into other regions.

It links eight days on the Douro between Porto and Vega de Terron with another eight-day voyage from Lyon to Arles in Southern France and is priced from $8,195pp twin share.

Another option is Evergreen’s 19-day Imperial Charms of Russia and Danube Explorer River cruise, operating from St Petersburg to Budapest, which links a 10-day sailing on MS Rossia with a nine-day lower Danube voyage.

“This is ground-breaking product, exclusive to Evergreen,” general manager Angus Crichton told Travel Daily of the many new combo packages.

“Guests have responded with enthusiasm for our combination itineraries and it made sense to expand our offering,” he said.

The program features a variety of early booking offers, including the return of a Fly Free to Europe (including taxes) deal on bookings on the 15-day Splendours of Europe itinerary in all cabins.