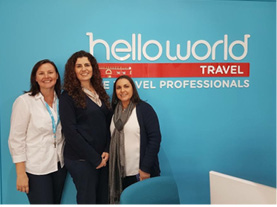 HELLOWORLD Travel Pakenham in Main Street, Vic celebrated its grand opening over the weekend to showcase the new store to the local community.

Fri night kicked off with a VIP event with local traders and associates, followed by a grand opening family day on Sat.

Owners of Helloworld Travel Pakenham, Arianna Albertazzi and Dylan Thompson said they were thrilled with the new store.

“Both days were a huge success, we had our Helloworld Travel HelloRoo mascot making a special visit, and face painting and showbags on the Saturday,” Albertazzi said.

The team at Helloworld Travel Packenham are pictured above during the celebrations.