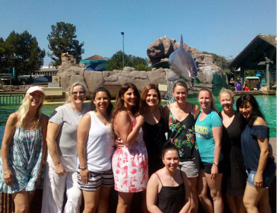 ITRAVEL agents spent last month in all parts of the world, taking part in three famils.

Agents travelled to West Hollywood and San Diego in the United States, Xi’an and Zhangjiajie in China and another group cruised the Mekong River in Cambodia and Vietnam.

The California group stayed at Ramada Plaza in Los Angeles and visited Universal Studios and shopped until they dropped at Citadel Outlets.

In San Deigo the group dined with the Orcas at Sea World and visited the San Diego Zoo.

In China, itravel agents explored the agent city of Xi’an where they visited the Terracotta Warriors.

The group also had a reception for Australian tourists with Wendy Wu Tours before braving the heights of Tianmen Mountain.