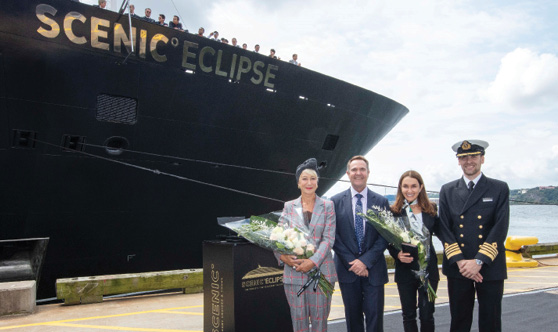 SOME major star power was present to mark the christening of Scenic Eclipse in New York City recently, with Academy Award-winning actress and godmother Helen Mirren heading up the lavish ceremony.

Mirren was joined by her husband Taylor Hackford and welcomed warmly on board by Eclipse’s co-owners Glen and Karen Moroney.

“It was an honour to welcome Helen and Taylor on board and to share with them our vision and passion which together with the dedication and talent of the Scenic team has created an experience which has set a brand new bench mark in discovery cruising,” Moroney enthused.

The official naming ceremony was attended by more than 350 members of the global media, as well as agents and VIPs who were on hand to witness Mirren christen the ship dockside by breaking the ceremonial bottle of champagne against her hull.

Mirren was gushing in her appraisal, stating: “I am thrilled to be invited to take on the role of Eclipse’s godmother…she is an exceptional cruising experience”.