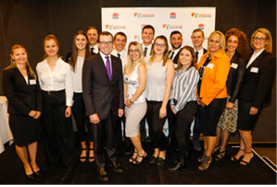 Minister for Tourism and Major Events and Assistant Minister for Skills Adam Marshall congratulated the 14 recipients.

“The students honoured today represent the future of tourism and hospitality, and embody the commitment to excellence that is critical to the continued success of our industry,” he said.

The NSW Government has been acknowledging high achieving tourism and hospitality students at a Minister’s Student Achievers Awards ceremony every year since 1990.