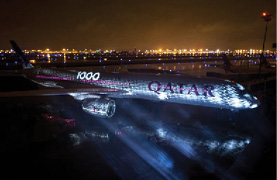 AIRCRAFT manufacturer Airbus has delivered the world’s first A350-1000 airliner to launch customer Qatar Airways at a delivery event in Toulouse.

The aircraft is the first of 37 A350-1000s ordered by QR and is the first ever Airbus fitted with its new Business class Qsuite seats.

Qatar Airways chief exec Akbar Al Baker said the aircraft would allow the airline to keep ahead of the curve.

Qatar Airways will debut the aircraft on the Doha-London Heathrow route from 24 Feb on the afternoon QR15/16 service.

Pictured is Qatar Airways’ first Airbus A350-1000 during a night-time lighting show held in Toulouse, France.