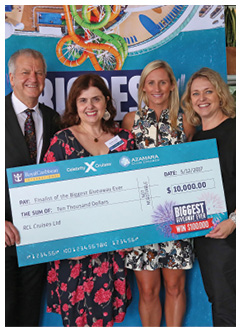 BRUNELLA Carchidi from Flight Centre Leichhardt took home the top prize on Tuesday at Royal Caribbean’s Biggest Giveaway Ever, winning a cheque for $10,000. Second prize winners included Anne Calder from Ozcruising and Jasmine Allen-Foster from Flight Centre Henley Beach. Jasmine has won a place on board Symphony of the Seas in Apr 2018 and Anne has won a place on Celebrity Edge’s inaugural trade sailing in Dec 2018.

The biggest giveaway promotion was held to celebrate Royal Caribbean’s 10th birthday down under this season, and to thank its Australian and New Zealand travel agents for their ongoing support over the past decade. Ten finalists flew to Sydney for the major prize event at Hacienda, Circular Quay, where they played the final round for a chance to win $100,000. Throughout the incentive, hundreds of Aussie and Kiwi travel agents took home spectacular prizes, including two eight night South Pacific cruises — one on Ovation of the Seas and another on Celebrity Solstice — 100 $50 EFTPOS cards and 300 movie tickets.

“I’m absolutely over the moon! It’s been an amazing day and to top it off, I’m going home with ten thousand dollars,” said Brunella Carchidi, the lucky winner.

“This incentive is the perfect way to thank our agents for all their support…and we look forward to working together in the future to grow this incredible industry,” said Peter McCormack, Head of Sales, Royal Caribbean Cruises Australia.