SKIMAX hits the slopes in NZ 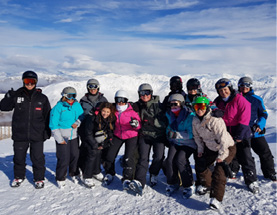 TEN Aussie travel agents had an opportunity to experience Queenstown and Wanaka in New Zealand recently, skiing at Coronet Peak, The Remarkables, Cardrona and Treble Cone thanks to SKIMAX & Air New Zealand.

They also enjoyed a Kiwi Haka Show, dined at the Skyline mountain-top restaurant in Queenstown, took a high speed adventure on the Shotover Jet boat and enjoyed the spectacular views on a scenic helicopter ride.

The group is pictured during a break on one of the South Island’s spectacular runs. The post SKIMAX hits the slopes in NZ appeared first on Travel Daily.