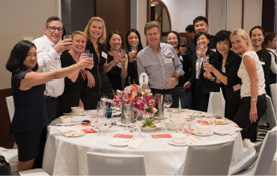 CHINA Eastern Airlines and Qantas celebrated the Chinese New Year together in style by holding a special dinner event in Sydney on 01 Feb.

The night saw the two airlines talk up the importance of their alliance, especially in light of the recent growing travel demand between the two countries.

Pictured: The Chinese New Year and MU/QF partnership is toasted by the attendees in Syd.