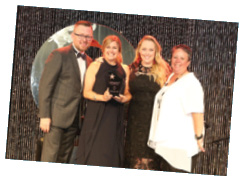 SCENIC recognised the achievements of the top performing travel agencies and consultants in Australia and New Zealand at its annual Night of Stars event, held on 03 Feb at Ivy Ballroom in Sydney.

Hosted by comedian Vince Sorrenti, more than 200 guests attended the prestigious event, which saw five national honours presented, along with awards to the top office in each state around Australia.

Eleven agents were recognised with Scenic’s Diamond status for 2017 as part of the luxury cruise and tour company’s elite partner scheme.

To mark Scenic’s 10 year anniversary of river cruise innovation, four special Scenic Enrich awards were also presented to agents in recognition of their support since the first Scenic “Space-Ship” was launched in 2008.