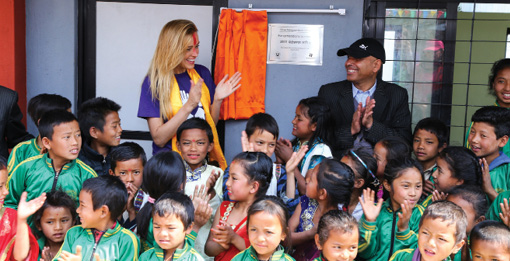 U by Uniworld and The Travel Corporation’s TreadRight Foundation have celebrated the reopening of a school in Nepal which was left unsafe following the 2015 earthquake.

The school was built in partnership with All Hands and Hearts — Smart Response, an organisation co-founded by U by Uniworld “guardian angel” and supermodel Petra Nemcova.

When Nemcova was announced as the brand’s guardian angel, the cruise line donated US$50,000 to support her charity and the rebuild of Nibugaun School in the Sindhupalchok district of Nepal.

During the event, Nemcova and guests were warmly greeted and branded with a red tika (dot) on their forehead, a symbol of good luck to mark the celebration, followed by a fire being lit to signify new beginnings and a bright future.

Nemcova is pictured with the children and the principal.