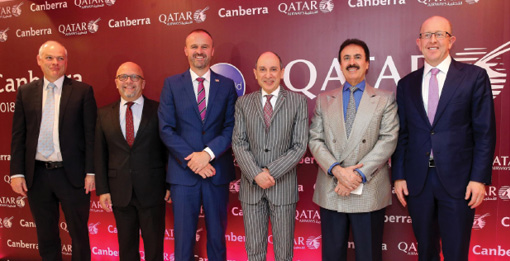 ANY hopes of a non-stop flight between Doha and Canberra have been quashed by Qatar Airways boss Akbar Al Baker, for now.

He told media at QR’s press conference in Canberra yesterday that a direct flight into the capital out of the Middle East would not be possible at this stage due to CBR’s insufficient runway length.

Al Baker said that although a long-haul flight from the Middle East would be able to land at Canberra, “we will not be able to take off”.

“When you are going for such an ultra long-haul flight the aircraft is very heavy so it would need a minimum of 4,300 metres… to be able to fly directly to other destinations, via our hub in Doha,” he explained.

“We don’t intend to land anywhere else mid-way so this [transit in Sydney] is the only alternative we have”.

Canberra Airport md Stephen Byron said the facility would address extending the runway as part of its master plan “over time”.

Byron spruiked QR’s new route for Canberrans, saying people will appreciate the opportunity “to avoid all the hassle in Sydney”, such as the delay and transfer of terminals for a domestic to int’l connection and “significantly long changeover times”.

“To be guaranteed to be on the same plane and to have your luggage clear Customs in Canberra Airport is a substantial advantage over the alternative,” Byron said.

If Canberra extended its runway, the QR boss said a non-stop service would be considered.

“We would look at every opportunity to fly direct.

“Our strategy is always to fly point-to-point directly, without going through a busy or congested hub, anywhere in our network,” Al Baker said. The post No DOH/CBR non-stop, yet appeared first on Travel Daily.