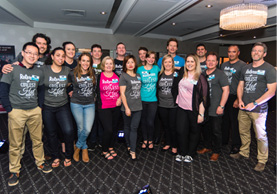 HUNDREDS of Australian agents and travel decision influencers flocked to various functions as part of the recent 2017 Rotorua Tourism Roadshow.

The delegation, which included the show’s largest ever group of local tourism operators stopped by the Gold Coast, Brisbane, Sydney and Melbourne.

It marked the fourth time Destination Rotorua had led a contingent to Australia and was timed to coincide with the end of the Tourism New Zealand consumer campaign and a key booking time for consumers.

The team are pictured.