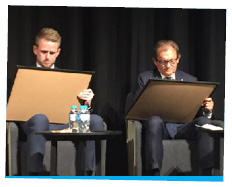 Reinforcing Silversea’s commitment to the local travel industry, both Roberto and Barbara met with key industry stakeholders during their visit in addition to taking part in panel discussions and specialist breakout sessions alongside other top execs from key cruise lines.

Australia has become Silversea’s third largest market, in some destinations it is close to overtaking the UK as the second largest market after the USA.

Australia and New Zealand are both seen as very important strategic parts of Silversea’s future plans and continued expansion into the luxury expedition market with one of the largest uptakes of guests travelling on Expedition cruises to Antarctica, the Arctic, Kimberley, Asia and Galapagos.

Recognising the potential of the cruise market early, Silversea was one of the first luxury cruise brands to establish a dedicated office in Sydney back in 2008.

Since then, Silversea’s Sydney team has expanded significantly with the sales team alone now accounting for seven employees.

Cruise industry execs were all ears to hear what Silversea CEO Roberto Martinoli had to say on the Cruise360 panel.

Roberto Martinoli, Silversea CEO taking part in a panel discussion (along with RCI’s Adam Armstrong), sharing with the audience his selected word to reflect the current state of the industry – “Experiences”.