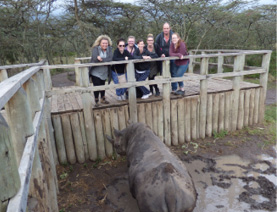 SIX Flight Centre Travel Group agents were given the chance to sample Kenya’s abundant wildlife and adventure on one of Bench Africa’s most popular itineraries, the Kenya Highlight.

On the trip, participants even had an opportunity to get up close and personal with an adult black rhino named Baraka.

Baraka (pictured) became the rhino ambassador at Ol Pejeta Conservancy when he went blind and had to be taken in.

Agents had an enriching cultural experience at a Maasai village and also witnessed a near kill while on a game drive when a leopard dashed past them chasing an impala.