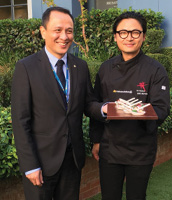 “With the help of this partnership we hope to become a five-star airline in the very near future,” Ha said.

Chef Luke will take responsibility for creating new in-flight menus to showcase the different flavours of the regions of Vietnam.

In his address Nguyen shared his inspiring story of growing up as a refugee in Australia, where he discovered his love of Vietnamese cuisine in his parents’ restaurant.

He said he would use his experience in similar industry partnerships – such as his long-standing association with APT – to promote Vietnam and showcase what the country has to offer.